Why Shepherds? | Voice of Prophecy 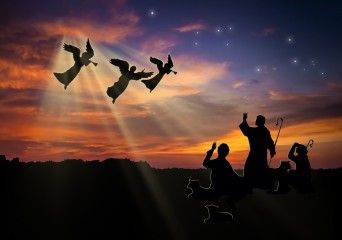 A few Christmases ago we were living in Maryland. Over the holiday we managed a day trip up to Lancaster, Pennsylvania, to visit Amish country. It was incredible to see how the Amish live and work, and I was delighted to bring home what is now one of my favorite Christmas items: an “Amish” nativity set.

Notice the shepherdess in this set. She is dressed in a traditional bonnet and dress with a little quilt slung across her skirt—a sheep in her arms. There is another sheep at her 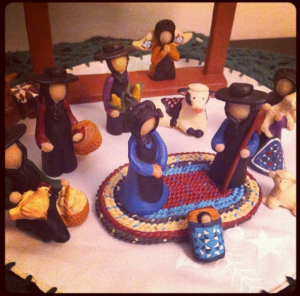 feet, and Joseph is depicted with a shepherd’s staff. A sweet, tranquil scene surrounds the babe in the manger. Quite unlike what it was really like that night.

I’ve often wondered, and perhaps you have too, why the shepherds were the first to hear the news of Jesus birth? Why not the scribes or scholars? To find the answer we have to begin in the only gospel account that mentions the shepherds, and it is found in Luke.

“Now there were in the same country shepherds living out in the fields, keeping watch over their flock by night. And behold an angel of the Lord stood before them, and the glory of the Lord shone around them, and they were greatly afraid. Then the angel said to them, “Do not be afraid, for behold, I bring you good tidings of great joy which will be to all people. For there is born to you this day in the city of David a Savior, who is Christ the Lord. And this will be the sign to you: You will find a Babe wrapped in swaddling cloths, lying in a manger.”

And suddenly there was with the angel a multitude of the heavenly host praising God and saying:

​“Glory to God in the highest,

​​And on earth peace, goodwill toward men!”

​So it was, when the angels had gone away from them into heaven, that the shepherds said to one another, “Let us now go to Bethlehem and see this thing that has come to pass, which the Lord has made known to us.” And they came with haste and found Mary and Joseph, and the Babe lying in a manger. Now when they had seenHim, they made widely known the saying which was told them concerning this Child. And all those who heard it marveled at those things which were told them by the shepherds. 19 But Mary kept all these things and pondered them in her heart. Then the shepherds returned, glorifying and praising God for all the things that they had heard and seen, as it was told them.” Luke 2: 8-20

This scene has been read and re-enacted for nearly two thousands of years. Scores of children have dressed up in bathrobes with hand towels or ties wrapped around their heads to depict this starry-night scene. When you read the account in Luke perhaps a memory from your childhood or of your children came to mind instantly. It is a beautiful scene, but the reality was probably not like any scene that we’ve ever seen re-enacted at the front of a church.

A few weeks ago I stumbled upon an interesting article by Randy Alcorn called “Shepherd’s Status”. Alcorn describes in fascinating detail what it would have been like to be a shepherd back in Jesus’ day.

In Christ’s day, shepherds stood on the bottom rung of the Palestinian social ladder. They shared the same unenviable status as tax collectors and dung sweepers…. During the time of the Patriarchs, shepherding was a noble occupation…. When the twelve tribes of Israel migrated to Egypt, the encountered a lifestyle foreign to them. The Egyptians were agriculturalists. As farmers, they despised shepherding because sheep and goats meant death to crops…. In the course of 400 years, the Egyptians prejudiced the Israelites’ attitude toward shepherding.

The shepherds that watched over their flocks by night in the Biblical account in Luke were not men revered or esteemed by society. These were men marginalized by society.  Alcorn continues,

Some shepherds earned their poor reputations, but others became victims of a cruel stereotype. The religious leaders maligned the shepherd’s good name; rabbis banned pasturing sheep and goats in Israel, except on desert plains…. ‘To buy wool, milk or a kid from a shepherd was forbidden on the assumption that it would be stolen property’…. Shepherds were officially labeled ‘sinners’—a technical term for a class of despised people.

The shepherds who navigated the dark streets of Bethlehem to find the newborn baby were not the kind of men that regularly made kingly visits. These men were separated from mainstream society and likely their language, habits and associations would have been repulsive to those living in the homes they passed.

So, why did a host of angels bring these men the glad tidings that Jesus was born? I believe there are three reasons.

1. This foreshadowed Jesus’ role as the Good Shepherd. By heralding the good news of Jesus’ birth to the shepherds, Jesus hinted right from the beginning what His plan was.  “I am the good shepherd. The good shepherd lays down his life for the sheep.” John 10:11 God’s plan from the foundation of the world was for Jesus to give His life for us, just as the shepherds would have done for their sheep. The angels heralded His birth to those who exemplified this mission

2. God despises our smugness, prejudice and pride. The shepherds were undoubtedly coarse, unlearned men. Men that the scribes and pharisees would have delighted to shun and avoid. Men despised and rejected—just as He would soon be. In the light of divinity each of us is filthy, simple and broken. The heralding of His birth to some of the lowest of the low reminds us that we are all unwashed in comparison to the Divine. Jesus stooped to our level to pay the ultimate sacrifice.

3. He longs to reach the unreachable. The shepherds sitting out that dark night watching their sheep in the moonlight were exactly who He came to save. Later Jesus reminded His followers that “Those who are well have no need of a physician, but those who are sick. I did not come to call the righteous, but sinners, to repentance.”Mark 2:17 Sinners—the group that the “righteous” had shunned—are the very people that He came to this Earth as a babe to save. Sinners like the shepherds. Sinners like you and me. 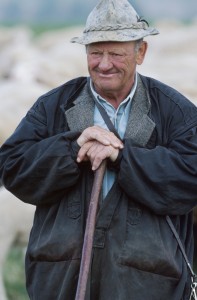 Aren’t you glad that the shepherds were real men and not the sanitized versions we portray at Christmas time? Otherwise there might not be hope for the rest of us real women and men of the ages—fallen sinners in need of a Savior.