The Stanley Ghost | Voice of Prophecy 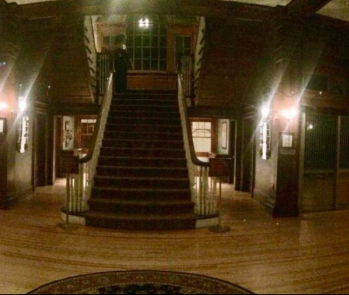 In recent weeks, a creepy photograph taken just up the road from my house started making the rounds on the internet. It was taken in the lobby of the Stanley Hotel, widely believed to be one of the most haunted buildings in America.

If you look carefully, there's a shadowy humanoid figure, said to be a woman, standing at the top of the staircase. Some people believe there's a shorter figure to her left, peeking over the railing.

The man who snapped the picture claims there was nobody on the stairs at the time. "I don't like when people are in my shots, so when I took this photo, I had waited until the grand stairwell was cleared of people before taking the pic," he told reporters.

Paranormal experts feel certain that the photo has not be Photoshopped. "This could be a legitimate ghost, as far as we can tell," said Kevin Sampron, of SPIRIT Paranormal Investigations.

Nope, it's not. People frequently claim to see strange things at the Stanley Hotel, and many believe that the hotel's long-dead founders, F.O. and Flora Stanley, haunt the premises as if they were still trying to oversee the business. But for the Christian, the entire notion that spirits of the departed haunting might be visiting that building—or any other, for that matter—must be rejected out of hand.

For the living know that they will die; but the dead know nothing, and they have no more reward, for the memory of them is forgotten. Also their love, their hatred, and their envy have now perished; nevermore will they have a share In anything done under the sun. (Ecclesiastes 9:5, 6)

The Bible is clear: once you're dead, you no longer "have a share in anything done under the sun." It's impossible for you to haunt the living, because you "know nothing," and presumably, the art of haunting would require some knowledge.

Not convinced? How about this rather pointed statement from the book of Job:

As the cloud disappears and vanishes away, so he who goes down to the grave does not come up. He shall never return to his house, nor shall his place know him anymore. (Job 7:9, 10)

I'm sure that if the Stanleys could, they would love to come back and check on their former home; it seems like the kind of thing I would want to do. But biblically speaking, it's not possible. The dead never return to their homes, and they are not seen ("known") by the living.

So what's on the stairs in that photograph? I don't know. A trick of light? A malfunction of the camera? A demonic presence? A blurred hotel guest who suddenly stepped into the frame? I really don't know—but I do know what it's not.

It's not a ghost.